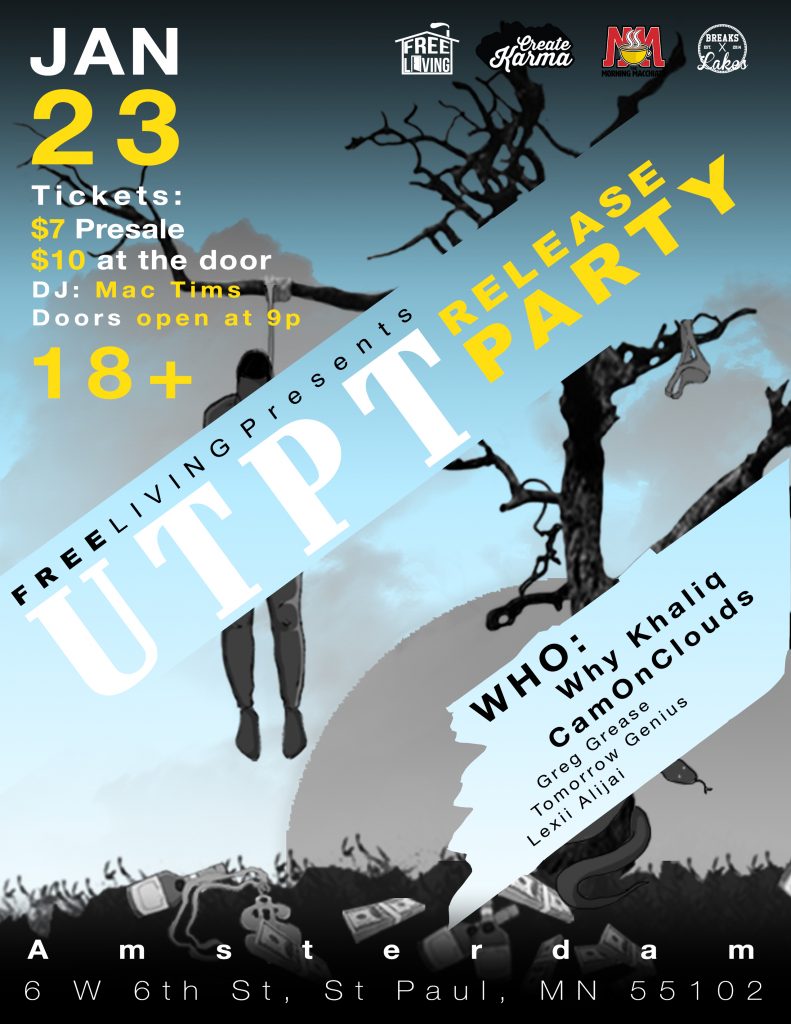 Khaliq is from St. Paul, Minnesota. Khaliq’s lyricism is driven by an unstable lifestyle and finding the truth. Khaliq often goes from narrative perspective, third person perspective, to even extroverted & introverted attitudes. He uses his lyrics to connect with his fans through real life events. Khaliq dropped 3 mix tapes but his latest and most current release was his LP “The Otherside The Six5″. He worked on the LP for about a year, which details the daily life and obstacles of growing up in the urban areas of St.Paul while being inaccessible to opportunities in Minneapolis. St. Paul’s native delivers a new and improved self proclaimed listening experience. Composed of city sounds, jazz influenced productions and aggressive lyrical work. He is currently working on his upcoming EP ” Under The Perspective Tree”.

From St. Paul Minnesota, found a love for music growing up listening to his older siblings.
Prior to making music basketball was his main focus and would later earn him a scholarship to play in college.
But music was not out of the future for him.
Cam would later learn there was more to music than just a recording over a beat.
Taking photos directing short films and also playing musical instruments became a part of him.
With a love for singing and rapping,
CamOnClouds has made his style mix with a little bit of both. He later teamed up with Why Khaliq and began pushing FreeLiving, and ever since a lot of progression has been made.
With a lot more work to do, CamOnClouds is currently working on his EP “Love Stories” which will release early 2016.
“I have learned that dreams come true, but rarely without hard work.”- CamOnClouds

The best hip-hop albums don’t settle in the mind easily. And Greg Grease’s Cornbread, Pearl, and G kneads that stubborn gray matter into improbable new shapes on every track. Though the Minneapolis producer-turned-rapper directly recalls what his father played for him on Lizzo-assisted “I Still Love H.E.R.” — Busta Rhymes, A Tribe Called Quest, and Slum Village — this dense masterpiece never sounds like an imitation of any of them. Or Outkast, or the Roots, for that matter. Instead, it carries on these innovators’ tradition of intra-album, heck, intra-song revamps. Don’t get too hung up on one rhyme scheme or a particular beat, because Grease re-plots his course frequently, while never sounding lost. Be it the sun-kissed park imagery on “Summer Saturdays” or the rapid-fire flow of “Cliches” (“Conversation done changed up/Had to switch my game up/Not the same as these lame ones/Competition don’t play much”) or the confident head-nodder “C.R.E.A.M Dreams,” it’s hard to believe this guy ever rapped about being on the wrong side of a glass ceiling. By Reed Fischer, City Pages Music Editor

Lexii Alijai, born Alexis Lynch was born and raised in Saint Paul, Minnesota. Lexii is only seventeen and started rapping at the age of ten. Lexii decided she wanted to take her music career seriously when she turned sixteen, Lexii even went a step further to drop her first mixtape on her sixteenth birthday. Lexii said she started rapping because her uncles did music as well and being raised in the same house as them made her want to pursue music.