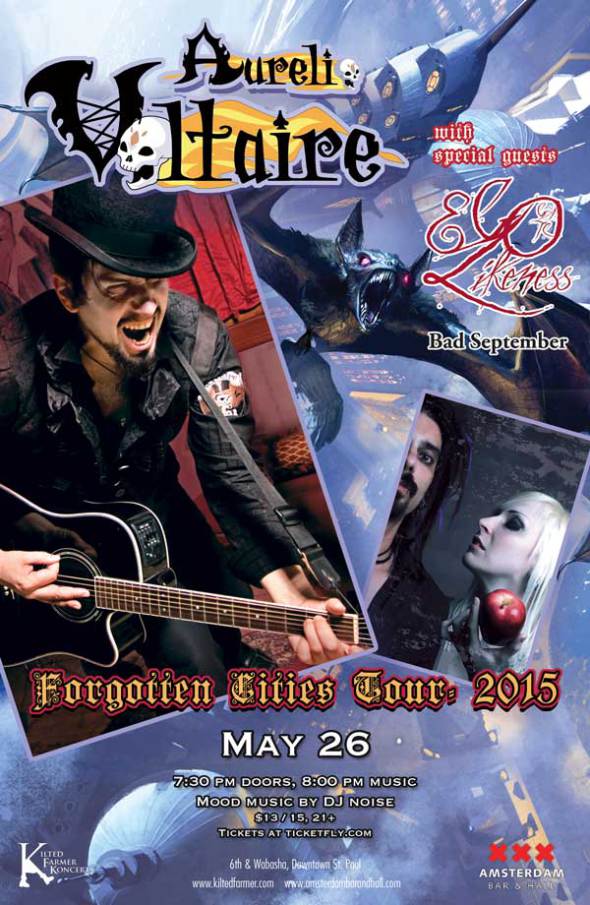 Voltaire (Aurelio Voltaire Hernandez) is often described as a modern day renaissance man. He is a singer/ performer, creator of comic books, animation and toys.

An internationally touring musician, he is at the forefront of the Gothic, Steampunk and Dark Cabaret genres headlining some of the biggest horror, sci-fi and comic book conventions as well as Gothic and Steampunk festivals for nearly two decades. His music can best be described as a collection of murder ballads, tongue-in-cheek exercises in the macabre, with just enough bawdy songs about Star Trek and Star Wars to keep a convention audience rolling in the aisles. Many know him for his songs “Brains!” and “Land of the Dead” from the Cartoon Network show “The Grim Adventures of Billy And Mandy”.

Voltaire’s live shows, whether solo or with his skeletal orchestra, are full of stories and games. Many describe his shows as sitting around a fire while an old friend regales you with tales, presuming that old friend drinks a liter of rum a night, dates zombie prostitutes and wrestles Krakens.

Voltaire has been recording and touring for over 15 years. He’s released 11 full length CDs.

Ego Likeness was created in 1999 by artist Steven Archer, a DC native, and writer Donna Lynch in Baltimore, Maryland. Taking their name from Frank Herbert’s classic science fiction novel ‘Dune’, the band began as an experimental/ dark trip hop project. A demo called ‘Songs From a Dead City’, recorded on a four track, was released in 1999.

By 2000, Archer and Lynch were moving the project in a darker electronic/ dance direction, resulting in a self-released full-length album entitled ‘Dragonfly’.

Ego Likeness signed with Dancing Ferret Discs for the release of 2004’s ‘Water to the Dead’. This album featured the band’s electronic roots while exploring a heavier rock sound.

2005 saw the band tour Germany, Luxembourg, and the continental US with label mates The Cruxshadows, and their first album ‘Dragonfly’ was re-released on Dancing Ferret Discs.

In 2006, EL toured Germany once again with The Cruxshadows, performed at Dragon*Con in Atlanta GA, and released their third full-length CD ‘The Order of the Reptile’ (DFD), as well as their first video for the track ‘Aviary’ (directed by Lynch, Archer, and late Baltimore photographer Lauren E. Simonutti).

The winter of 2006-2007 saw another US tour with The Cruxshadows and Ayria.

In late autumn of 2007, EL was back in Germany, as well as Poland, and the UK with Alfa-Matrix act Ayria (Canada) and Australia’s Angelspit (DFD). The band also released the first of four limited edition EP’s entitled ‘South’.

In early 2008, they headlined a warm-up tour of the US and performed at Black Sun IV before setting off with Voltaire in the spring for his month-long Maiden Voyage Tour. EL performed once again at Dragon*Con 2008 in Atlanta GA.

Their fourth full-length album, ‘Breedless’, was released on Metropolis Records in 2010, as well as the ‘North’ EP.

2012 saw the release of the final compass EP, ‘East’, and a second re-release of the now-out-of-print album ‘Dragonfly’. A new single and video (directed by Kyle Cassidy, Lynch, and Archer), ‘Treacherous Thing’, will be released in the fall.
The fifth full-length, ‘Know Thine Enemy’ is scheduled for release in early 2013.

In addition to touring extensively with The Cruxshadows, Voltaire, Ayria, Angelspit, The Ludovico Technique, EL has had the honor of sharing the stage with The Damned, Peter Murphy, Chris Connelly, Collide, Razed in Black, Bella Morte, Das Ich, Rasputina, Iris, Decoded Feedback, The Azoic, More Machine Than Man, In Strict Confidence, Combichrist, Stromkern, New Model Army, And One, Seabound, Attrition, Assemblage 23, Nitzer Ebb, Aesthetic Perfection, Terrorfakt, The Gothsicles, and many others.

They have appeared on numerous compilation CDs, including Electronic Saviors 1 and 2, several Asleep by Dawn and Hot Topic releases, and ‘Where’s Neil When You Need Him?’ (a tribute to the work of author Neil Gaiman, DFD 2006); released remixes for The Cruxshadows (Cassandra-Fortress in Flames), The Last Dance (Terribly When- Reflections of Rage), Thou Shalt Not (Inside of You, In Spite of You- The Projectionist), Black Tape for a Blue Girl (Tarnished- Scarecrow), Information Society (This Way Tonight- Synthesizer), Angelspit (Vena Cava- Krankhaus, Girl Poison- Black Kingdom Red Kingdom , Ditch the Rest- Carbon Beauty), and many more, and have been remixed by acts such as Komor Kommando, Bella Morte, Angelspit, Terrorfakt, and many others.

Archer and Lynch appear on Voltaire’s album ‘Then and Again’, and Lynch has lent her vocals to tracks on The Dark Clan’s ‘Dance Magic Dance’, Angelspit’s ‘Hideous and Perfect’, and Aiboforcen’s ‘Dedale’.

EL has been featured in publications such as Gothic Beauty, Outburn, ABD, Sideline, Pollstar, Sonic Seducer, and COMA to name a few.

The band works extensively with renowned Philadelphia photographer Kyle Cassidy, one of his photographs of Archer and Lynch appearing as “Photo of the Day” on Wikipedia’s main page in 2012.

Bad September is a retro-futurist steampunk art rock band based in Minneapolis, MN. They employ a variety of styles including rock, folk, cabaret, and chamber music to weave an alternate history of the 20th century.
Bad September has two albums: THE BRITISH EP, featuring 5 songs about a Communist uprising in England; and AUSTRIA-HUNGARY 1957, with 11 tracks about the final days of an aristocratic Europe on the brink of war. Each album also contains a variety of supplemental world-building material.