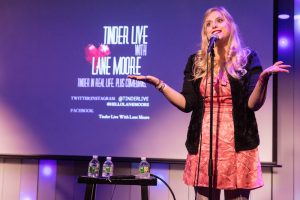 The only comedy show exploring the crazy world of Tinder, the hot new dating app that hooks up local singles based solely on physical attractiveness. The critically acclaimed show is an anything-can-happen interactive comedy showstopper with helpful and oftentimes ridiculous tips, tricks, and real-time swiping and messaging (and sometimes even real-time phone calls and texting with Tinder matches)! If you’ve ever been on an online dating site, you need to see this show.

ABOUT LANE
Lane Moore is an award-winning stand-up comedian, writer, actor, and musician living in New York City. Her monthly comedy show Tinder LIVE! was named on The New York Times Critic’s Picks, and CBS called it one of the 5 Best Comedy Shows in NYC. BUST Magazine named her band It Was Romance the Best Band of 2015 and Billboard named them one of 16 Female-Fronted Bands You Should Know. In 2017, she created popular blog Hotties of MTV’s “Next,” which was quickly praised by The AV Club, Distractify, and Cosmopolitan who called Moore a “genius” and the page “perfect.” Moore was also featured on an episode of Comedy Central’s @midnight with her segment, which Chris Hardwick called “amazing.”

The New York Times called her appearance on season five of HBO’s GIRLS “one of my favorite moments of this season…[Moore is] wonderful.” Vogue called her a “jack of all trades,” adding, “her Instagram videos give me life.” She is also a recurring panelist on the brand new Rooster Teeth TV show “What Do You Know?” airing on GO90. In 2017, she had an appearance on @midnight with a segment based on her popular Instagram account, Hotties of MTV’s Next, and an appearance on MTV’s TRL.

She is a prolific writer for The Onion, The New Yorker Shouts and Murmurs, McSweeney’s, GQ, Glamour, Someecards, Playboy, MTV, former Sex & Relationships Editor at Cosmopolitan.com, a regular commentator on VH1 and MTV talking head shows. She is also the producer and host of podcast Are You Afraid Of The Snark?, and the creator, producer, writer, director and star of the hit comedy web series Gold Stars. Lane also co-created a comic book based on her experiences in Los Angeles called Smarty Pants Lydia, which can be found online at Comixology