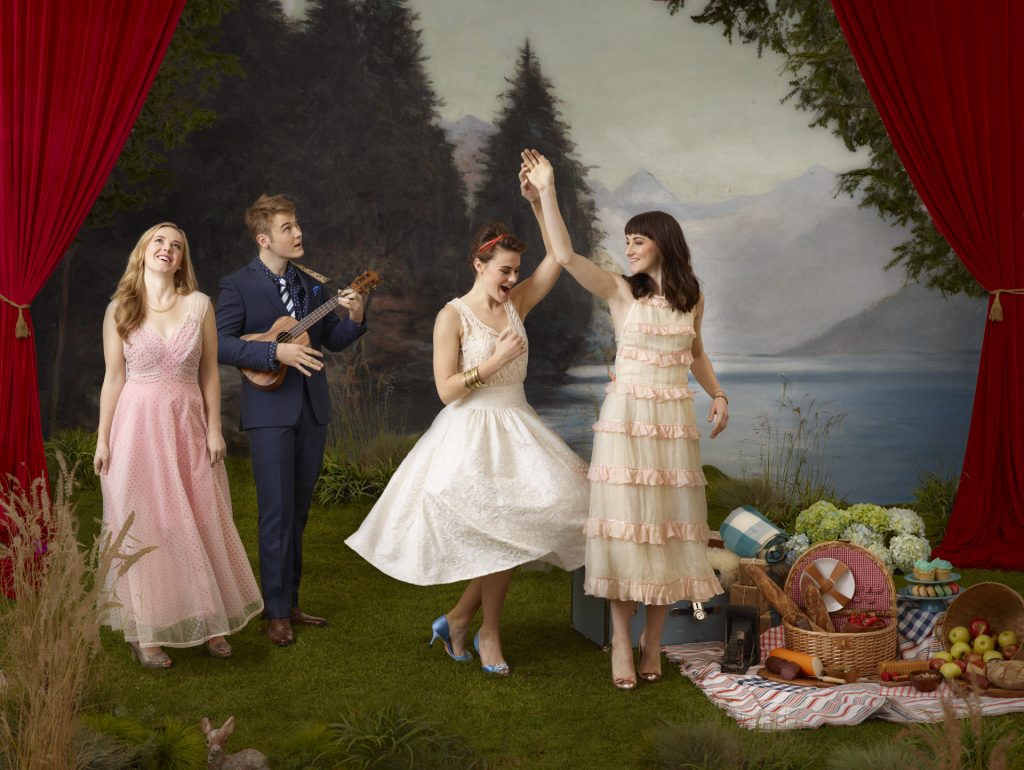 You cannot find another name as universally beloved as von Trapp. The story of the family who escaped Austria, moved to the United States, and toured the world singing for two decades has inspired generations since the film The Sound of Music was released in 1965. The history continues as the great-grandchildren of the Captain and Maria von Trapp take up the family tradition anew. Meet Sofi, Melanie, Amanda, and August von Trapp, four siblings that, for the last 12 years, have been singing on stages around the world to critical acclaim and packed houses.

Sofi (25), Melanie (23), Amanda (22), and August von Trapp (19) have toured and traveled over five continents – Europe, Australia, Asia, Africa and North America – and performed extensively in the UK, New Zealand, China, Japan, and the Philippines. They have appeared in concert at the Hollywood Bowl, The Sydney Opera House, The Forbidden City in Beijing, Seoul Square, Korea, the Grand Ole Opry, Austin City Limits and at La Nuit des Choeurs Festival in Belgium. The von Trapps made their Carnegie Hall debut in December 2012 with Pink Martini and the New York Pops Orchestra under the direction of Steven Reineke. They have also appeared with dozens of major symphony orchestras in the United States and Canada, including the Boston Pops, Cincinnati Pops, Toronto Symphony, the Pacific Symphony, and Nashville Symphony among others. They have appeared on the Today Show, Good Morning America, CBS Sunday Morning, The View, and The Oprah Winfrey Show.

The four siblings originally began by singing Austrian and American folk songs their grandfather, Werner von Trapp (portrayed as Kurt “the incorrigible” in The Sound of Music), taught them at the family home in Kalispell, Montana. The four simply knew their grandfather as “Opa,” and when he suffered a stroke 12 years ago, the siblings made a recording of the songs to cheer him up never expecting it would inspire a new musical legacy. Since that beginning, they have recorded six albums, a concert DVD, and are currently working on a number of musical projects to be released next year. They have recently collaborated on a song with Rufus Wainwright called “Kitty Come Home” which was released in September 2013 as part of Pink Martini’s new album Get Happy.

After many years of extensive touring, the four siblings have relocated to Portland, OR and have completed a new collaborative album with Thomas Lauderdale and Pink Martini. The album, Dream a Little Dream, which was released March 4, 2014, is their first major international release, and features guest appearances by The Chieftains, Wayne Newton, Charmian Carr, and Jack Hanna. They are also writing original songs and generating a new international, multi-lingual repertoire that honors their family legacy as well as their own immediate past.

These four musical siblings are ambassadors of music, heritage, and hope. Their deep connection to the hope-inspired impact of music brought them to Rwanda in 2009, where they taught music at an orphanage. They then learned the Rwandan National Anthem to honor the country’s message of forgiveness and hope and performed it for the Rwandan President. He was so moved that he gave 13-year-old August a cow from the presidential herd. The cow, however, opted to stay in Rwanda.

Despite their deep family allegiance, there are aspects of the von Trapp legacy that this generation has chosen to leave behind. “Lederhosen and I have been inseparable since the earliest childhood, even before our musical career,” August recently told the Austin American-Statesman. “We’ve been through it all together! However, despite a very sentimental attachment to the past, I look forward to a future of more modern attire. Who knows though, maybe they will come back into fashion?”