“Levi Schwartzberg, Patrick Adkins, Drew Stinson, and Ben Ehrlich formed Sound Skirmish early in 2014, looking to explore original and improvised music in a vibes quartet setting.  Since then they have appeared at the Twin Cities Jazz Festival, were named Jazz Central’s 2014 Group of the Year, and have been seen all across the Twin Cities.  The band members are scattered all over the country during the school year, so it’s precious times when the boys are back in town!
Levi Schwartzberg-Vibraphone
Patrick Adkins-Piano
Drew Stinson-Bass
Ben Ehrlich-Drums” 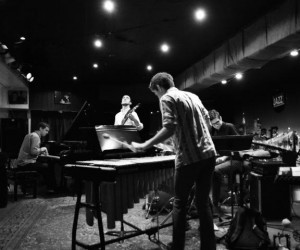