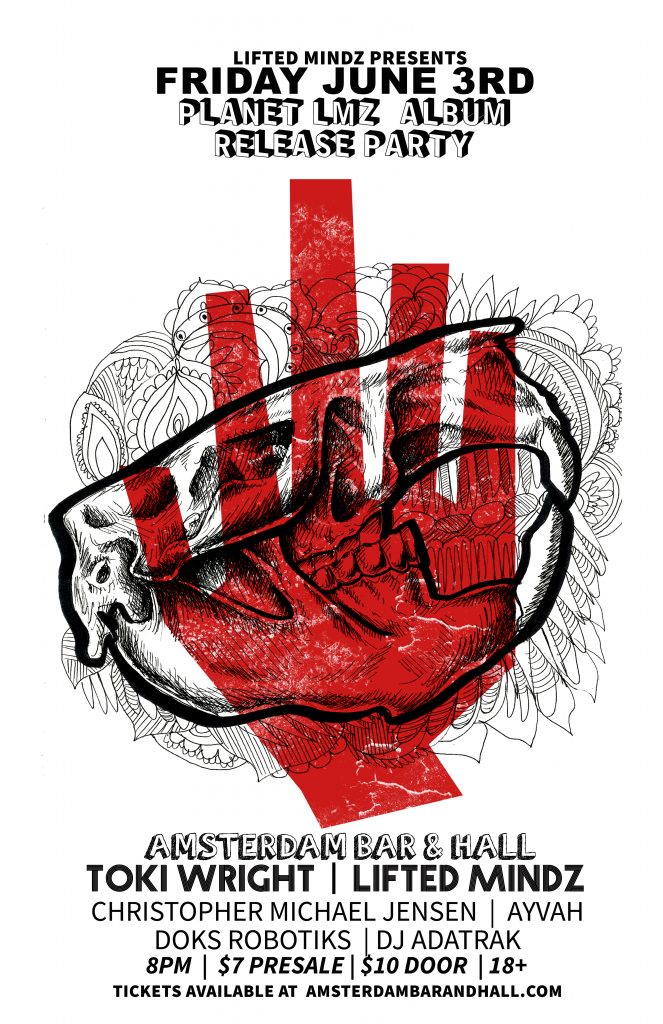 Lifted Mindz is an organic blend of hip hop, rock, and acoustic guitar. Their music speaks to a generation that is constantly in flux and
looking for meaning. Their music is driven by one philosophy: that living to help others and spreading love can radically change the
world we live in for the better. More than a band, Lifted Mindz is a community, and one that continues to grow as its sound and positive
message resonate throughout the Twin Cities. Although started from humble beginnings, their popularity continues to grow as what began with a set of acoustic guitars and home recording equipment has rapidly become a community of professional young musicians. Lifted Mindz is not a band. It is an idea. It is a dream. It is a cloud of smoke, a few notebook pages, and a microphone. Lifted Mindz is a movement, a community growing everyday to unite ideas, music, and art across all boundary lines, locally and globally. Lifted Mindz is a call to express yourself, break the norm, put up a middle finger to what brings you down, and rise above our greed and negativity to help contribute to a more harmonious home base. Their goal is to ignite, incite, and inspire, and to continue to blur the line between art and “reality.”

Blend soulful yet futuristic music with intelligent writing and you have Toki Wright. Wright has over one million YouTube views, albums with Rhymesayers Entertainment, top 20 charting on MTV for multiple videos, and an extensive and successful tour history. Now at the helm of Soul Tools Entertainment, Wright is poised to make a major impact on the music scene. Wright has played for sold out audiences throughout the United States, Asia, Canada, Africa, Europe, and South America, and has toured alongside artists like Brother Ali, Devin The Dude, Evidence of Dilated Peoples, Atmosphere, Sean Price, and more. He was recently chosen by the U.S. State Department as an arts ambassador performing in Sierra Leone, West Africa. Festival history includes Soundset, Scribble Jam, Rock The Bells, Paid Dues, Coachella and Bumbershoot (with Brother Ali), SXSW, and NXNE.

Christopher Michael Jensen has no alias. He lacks a fake persona. His music tackles everyday struggles, relationships, politics, and his own personal demons. His songs are at times self-assured and confrontational, and at other times vulnerable and soul searching. Through it all, however, he truly embodies the DIY philosophy and mantra of “living hip hop 24/7.” A student of the culture for more than half his life, Jensen began rapping in the year 2000 when he was just 13-years-old. Born and raised in Minneapolis, Minnesota, Chris has been an extremely active member of the highly renowned Twin Cities hip hop scene. He has shared the stage with hip hop legends and vets like Slick Rick, Cage, Joell Ortiz, 2Mex, Sadistik, Ceschi, Sapient, Kosha Dillz, and Soulcrate Music, as well as many local stars including DJ Abilities, Lizzo, Dem Atlas, Toki Wright, Kristoff Krane, Carnage The Executioner, Kill The Vultures, No Bird Sing, Guante, and Metasota. In 2015, he also toured the midwest on the Ain’t No Hold Up Tour. In 2014, Chris released his latest solo album CM Cool J, his most fully realized and focused work to date. Each of the 13 tracks on the album contain production from a different Minnesota beatsmith, with features from recent Rhymesayers signee Dem Atlas, as well as Liz Harper, Ashley Seeler, North Star Wisdom, and Lydia Liza of Bomba de Luz. In a review, Reviler.org commented that “what’s great about Chris is that with each release, he raps with a bit more confidence, and vocally he raps very conversationally, with almost a cynic twist, which definitely sets him apart,” adding that CM Cool J is “a lot more than meets the eye on the surface.” RapReviews.com said at times on the album Jensen “sounds like the Twin Cities meets The Coup,” and during other moments “is a little bit Marshall Mathers.” Christopher Michael Jensen has also been heavily involved with several charitable endeavors, playing a benefit for the Make-A-Wish Foundation in 2011, and the following year performing in support of international organization Oxfam and their fight against the West African food crisis. 2012 also saw the beginning of “Rap For Life” – a benefit series spearheaded by Jensen and his friend Ashley Seeler that has raised thousands of dollars for many life-or-death causes including suicide prevention, chemical dependency awareness, domestic abuse awareness, mental health, and at-risk youth. Other causes Chris has been involved with include benefits for the homeless, AIDS patients, children with autism, charter schooling, the fight to end sex trafficking, LGBTQ pride, and the troops and veterans.

Combining a longtime staple of the Eau Claire music scene with a genre currently taking the city by storm, Doks Robotiks blends jazz with hip hop into a volatile cocktail best served in a live setting. The collective prides itself on a large cast of musicians that contribute vocal hooks and horn lines to its funky hip hop core, hearkening back to the golden era ethos of Digable Planets and A Tribe Called Quest while simultaneously searching for that new, unfound sound. They recently released their debut album Doks.

DJ Adatrak made his way to the stage in a decidedly unconventional way. After graduating from the University of Minnesota with a degree in architecture, he knew his passion was more about building beats than structures. With this, Adatrak devoted his energy full time to honing his skills as a hip hop producer and DJ. Making a name for himself as a go-to DJ for private parties, Jimmy Cavanaugh a.k.a DJ Adatrak secured his first residency in 2008. Since then, he has performed in numerous major venues in and around his hometown of Minneapolis. Making the rounds on the local hip hop scene eventually led to his becoming a prominent fixture as well as a member of Slipmats Radio. Thanks in part to this exposure, Adatrak is now DJ for Rhymesayers artist deM atlaS. In addition to solo slots opening for Atmosphere and Prof, along with deM he has played the same stage with well-respected artists including Nas, Brother Ali, Cypress Hill, Joey Bada$$, Grieves, Grouch & Eligh, and Statik Selektah. When listening to one of DJ Adatrak’s fast-paced hip hop-saturated sets, the combination of technical agility mixed with often unanticipated transitions are reminiscent of DJ Premier, Mr. Dibbs, and DJ Woody – all among those he cites as his chief influences. Whether producing or performing, his mixes are geared toward tapping into the energy of the crowd and taking it to the next level. Adatrak has toured throughout the country, playing at legendary venues to sold out crowds, proving that following his passion was the right choice.