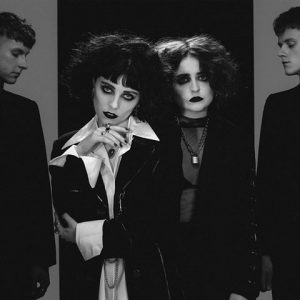 Manchester-based quartet Pale Waves began in the early 2010s when drummer Ciara Doran and vocalist/songwriter Heather Baron-Gracie met at a liquor store. The two became inseparable best friends and spent two years hanging out and working on songs in a very insular manner, eventually enlisting bassist Charlie Wood and second guitarist Hugo Silvani to transform their bedroom concept into a proper band. Fully formed, they crafted a dark pop sound, heavy on guitars and the influence of dreamier ’80s synth-pop acts like the Cure and the Cocteau Twins. In 2015 the group posted a few demo versions of songs online, eventually catching the attention of indie label Dirty Hit. Dirty Hit signed Pale Waves in 2017 and issued their debut single, “There’s a Honey,” produced by members of labelmates the 1975. Along with frequent touring, Pale Waves offered up second single “Television Romance” before dropping their first EP, All the Things I Never Said, in February 2018. A few months later, Pale Waves inked a deal with Interscope Records to handle their U.S. releases and offered up the single “Kiss,” which was billed as the first offering from their forthcoming full-length debut.