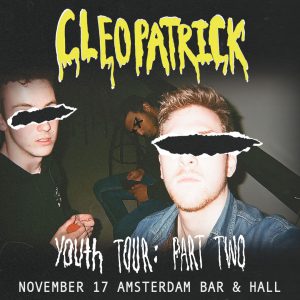 cleopatrick is a heavy alt-rock duo from the tiny town of Cobourg, Ontario – yup, the ‘c’ is lowercase.

Best friends since kindergarten, frontman Luke Gruntz and drummer Ian Fraser have an enviable connection that translates into a powerfully unified expression of sound. With a bastardized bass amp and split signal, Gruntz simultaneously commands the range of bass and guitar topped with provocative blues grooves and take-down breakdowns.

In early 2016, the pair recorded their first EP 14 in its entirety in a single studio session and was later dubbed one of the most promising acts for 2017 by 94.9 The Rock’s “Generation Next” program.

Now piling all of the torment and rhetoric of chasing big dreams within the limits of a small town, cleopatrick’s brand new single “hometown” gives a tasteful hint of growth and raw revelation expressed in their upcoming sophomore EP the boys (Fall 2018).