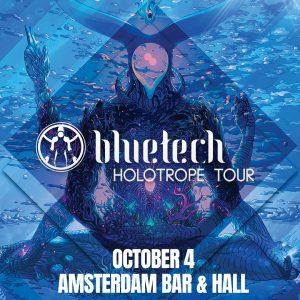 Evan Bartholomew has been performing electronic music for nearly 20 years as Bluetech, Evan Marc and Invisible Allies (with Kilowatts).

As an an internationally recognized touring music producer with over 27 album / EP releases and a seasoned portfolio of video game and film scoring credits, Bluetech is a master of analog and modular sound synthesis and DSP audio manipulation. He brings a passion for sound design and cutting edge audio exploration into all the work he touches. His music transcends the constructs normally associated with a calculated “electronic artist,” pursuing music with meaning and purpose with downtempo, future bass and progressive electronic music, rife with emotional intent and poly-rhythmic percussion.

Bluetech began his training as a classically trained pianist at a young age, and has explored his craft as a DJ, musician, film composer, record producer and label owner. His work has evolved to include his roots in classical composition and ear for nomadic harmonic progressions and a deep awareness of music as a kinetic force with body moving beat mechanics.

Working as a solo artist, as well as a producer, he has written scores for film & television (CSI: Miami, Scared Sacred, Occupy Love, Albedo Absolute, various television commercials), video games (Comet Crash 2 – forthcoming PS4) and virtual reality installations (MicrodoseVR). In addition to music, Evan has established a reputation as an accomplished graphic designer, illustrator, and 3D animator through both his personal work and commissions for clients (Microsoft, Austin City Limited, City Of Seattle). Bluetech has toured extensively throughout the U.S. and internationally, having shared stages with such acts as The Glitch Mob, The Orb, Bassnectar, Ott, Juno Reactor and many more.

Bluetech’s latest album “4 Horsemen of the Electrocalypse: The Black Horse” is an analog and modular based composition, in the same vein that he explored with his previous two albums “The Red Horse” and “The White Horse,” both released in 2016. Ranging from dark Detroit influenced electro, synthfunk, to more melodic techno explorations, this release pushes forward Bluetech’s unique analog based approach to sound and music production.