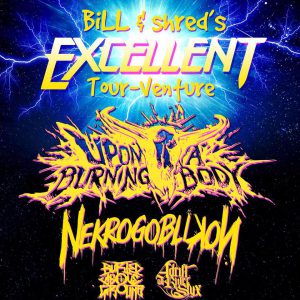 Prepare yourself for a brutal, unrelenting array of unabashed aggression and sheer ferocity that will beat you to oblivion. This is what UPON A BURNING BODY delivers each and every time. The San Antonio based group’s debut offering, The World Is Ours, caught the metal scene by storm with its crushing Pantera-esque grooves, dynamic riffing and captivating hooks. Their live performance is unmatched, which quickly had their name being spread by the masses throughout the scene.

Their highly acclaimed latest offering RED.WHITE.GREEN. was tracked, mixed and mastered with renowned producer Will Putney (For Today) at The Machine Shop in NJ. This album showed the band truly coming into their own unique sound.

With a clear vision for their identity and an immeasurable level of determination, UPON A BURNING BODY are now touring full-time throughout the world spreading their message of dedication, self-belief and relentless competitive greatness. Sumerian founder Ash Avildsen commented “Upon a Burning Body frontman Danny Leal has one of the most distinguishable and decipherable voices I have heard in years. With the perfect soundtrack of riffs and beats backing him and an explosive live show, there is no question what the very near future will hold for this band.”

UPON A BURNING BODY’s unrelenting touring schedule was highlighted by performances on the massive Rockstar Energy Mayhem Festival and The Vans Warped Tour. Expect the group’s third full-length album this summer.