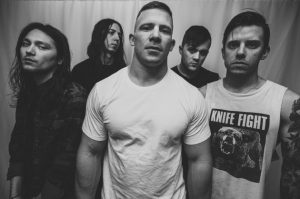 “We’ve always stayed true to who we are and allowed the songwriting process to take shape organically from record to record, and as the band has progressed, our sound has become more refined with metal and industrial influences,” states drummer Chris Mills, while guitarist Bo Lueders succinctly sums up what people can expect when they first spin the record: “To a Harms Way fan, I would describe ‘Posthuman’ as a blend of ‘Isolation'(2011) and ‘Rust’ (2015), but it’s sonically way more insane. To anyone else, I would simply say it’s full-on heavy and full-on aggression.”