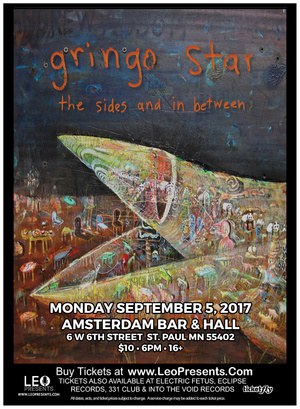 The 7-inch single will be the debut release from the new Grand Rapids, Mich.-based dizzybird records. “Working with Gringo Star has been on my mind since I met them at CMJ a few years ago,” says Brian Hoekstra, who co-founded the label with Nicole LaRue of Grand Rapids rock club The Pyramid Scheme. “Gringo Star has a unique, adventurous psychedelic rock & roll sound that’s infectious and timeless—these two sides could’ve come out at any point in the last 50 years. And now that dizzybird is releasing this 7-inch, we all get to dream together. Put out what you love, right? Seems like a good business model.”

The new Gringo Star single will be released digitally through all major online retailers, and will be available on vinyl at select record stores, the band’s shows and the dizzybird records website. The band plans to release their 4th studio album in the summer of 2015. They are going immediately into the studio following the 7″ tour to work on material they have been demoing the last few months.