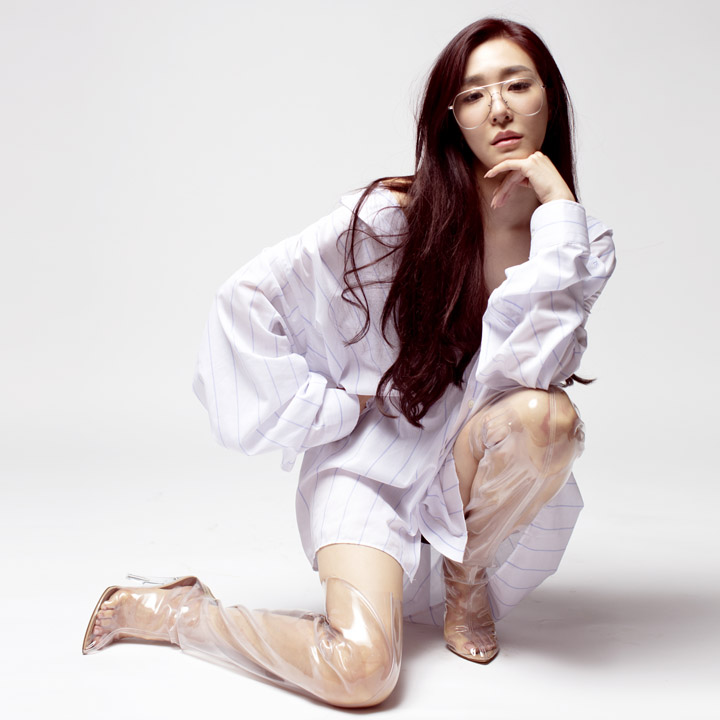 Pop artist Tiffany Young is a force of positive energy and youthful exuberance which belies the fact that Tiffany has been thrust into life lessons far beyond her years starting at 12.

At a tender age, Tiffany suffered the loss of her mother by suicide and found her “religion,” music, as a way to heal and recognize the path for her future. “Songs like Christina Aguilera’s ‘The Voice Within’ and Mariah Carey’s ‘Through the Rain’ really spoke to me. I realized how magical music is for the soul and I thought of it as a superpower. Singing and music healed me and I knew that in using my gift, I could heal others.”

Tiffany was always interested in performing, singing, etc, but was pushed farther after this upheaval in her life.

And then came Girls’ Generation, the hugely successful KPOP group. Tiffany was tapped to join the group as a founding member even though it meant flying across the world. She left her California life of high school, music lessons and friends with the faith of a child and a dream to sing.

Girls’ Generation was the biggest, and longest lasting, girl group of all time. Iconic in their genre, Girls’ Generation has 16 No. 1 singles, 1.8 billion YouTube views, 120 awards from various organizations, and 15 released albums. After world tours, millions of records sold and a decade as the de facto leader of that group, Tiffany is now ready to take on the world as a solo artist.

“Being in Girls Generation taught me so much about the creative process. It expanded my focus and ability and my confidence to trust my inner voice and be comfortable to take on writing producing, performing and fulfilling my next dream of being a solo artist.”

When she was writing her new song, “Over My Skin” she kept her mind focused on artists who came before her that started in a pop group but then broke out on their own. Tiffany adds, “I admire artists like Beyonce and Justin Timberlake who started as a group and then went on to being on their own in such a gigantic way.”

She is a gifted singer with a voice that has been compared to her idols Mariah Carey and Christina Aguilera among others, and her influences are as diverse as Madonna and Lady Gaga on the musical front and Anna Wintour and Baz Luhrmann on the visual front.

“I love bold artists who follow their passion. My mom used to play Madonna for me when I was little and we would dance. I didn’t understand until I was a bit older what she was actually singing about: becoming a woman, being self-empowered, owning your sexuality and your choices. All of those things are what I want in my songs.”

“I found empathy and compassion after my mom died. All I could think about was how much pain she must have been in to have done this and how my father just lost the love of his life.” She is now drawn also to music that shows that kind of empathy, love, romanticism, and compassion.

In Tiffany’s description, Girls’ Generation was like being in a group with several other Beyoncés “We are all close friends now and support one another. It is almost like we all left for college to pursue our personal paths, but still rely on each other for the kind of support only we can understand.”

Tiffany adds, “I was overseas since age 15 with no family. I would sit in on parent/band meetings and I was the only kid there. I learned quickly to be able to represent myself and the girls and also become fluent in Korean.” She laughs.

In her years with Girls’ Generation, Young took a leadership role in both the creative and musical arms of the group. “I learned that to lead is to serve and to serve is to lead and I take that seriously. I got how it wasn’t always about me but about how we were as a whole group so not that I am on my own, free to be myself, it is the most exciting time in my life,” she says emphatically.

Young’s new song, “Over My Skin,” which she co-wrote, is a perfect example of that freedom The sound is mature with a classic pop vibe and a hint of ’90s R&B. “The sound has my love for Britney Spears, Timbaland, Justin Timberlake, Pharrell and KPOP all carrying my voice. It is me all the way.”

As she sings the infectious chorus, “I want you over my skin/Cause I like it when you touch me/I don’t know where to begin,” it’s clear that Young has something strong to communicate. “I loved Sex and the City. Carrie Bradshaw and her friends, it wasn’t just about sex it was about the dynamics of a relationship and staying strong and independent.”

“Over My Skin” is about a young artist transitioning to the next phase of her life and letting herself be more emotionally naked for the first time. “I feel liberated like I’m finally stepping into my own superpowers!” adds Young, It is about doing my life my way and not for anyone else.

“When you first hear the song, you can say, oh that is about sex, but listen again, it is really deeper than that. It is about being a woman in this world at this time. My favorite line is ‘do nasty things and you don’t judge me’ because I think every woman feels that way and there is nothing wrong with it,” she proudly states.

Tiffany Young is about to launch her US pop career with power, self-esteem, supreme artistry and passion. And that can be an inspiration to us all.