Proof of vaccination may include a physical card or a photo of a complete vaccination card that matches the patron ID. Proof of a negative test may be a printed or digital test result that matches the patron ID. Children under 12, who cannot be vaccinated, can show a negative test to attend. People with a medical condition or closely held religious belief that prevents vaccination can attend with proof of a recent negative coronavirus test. If you are not vaccinated, we encourage you to wear a mask even if you’ve received a negative COVID test in the last 72-hours. 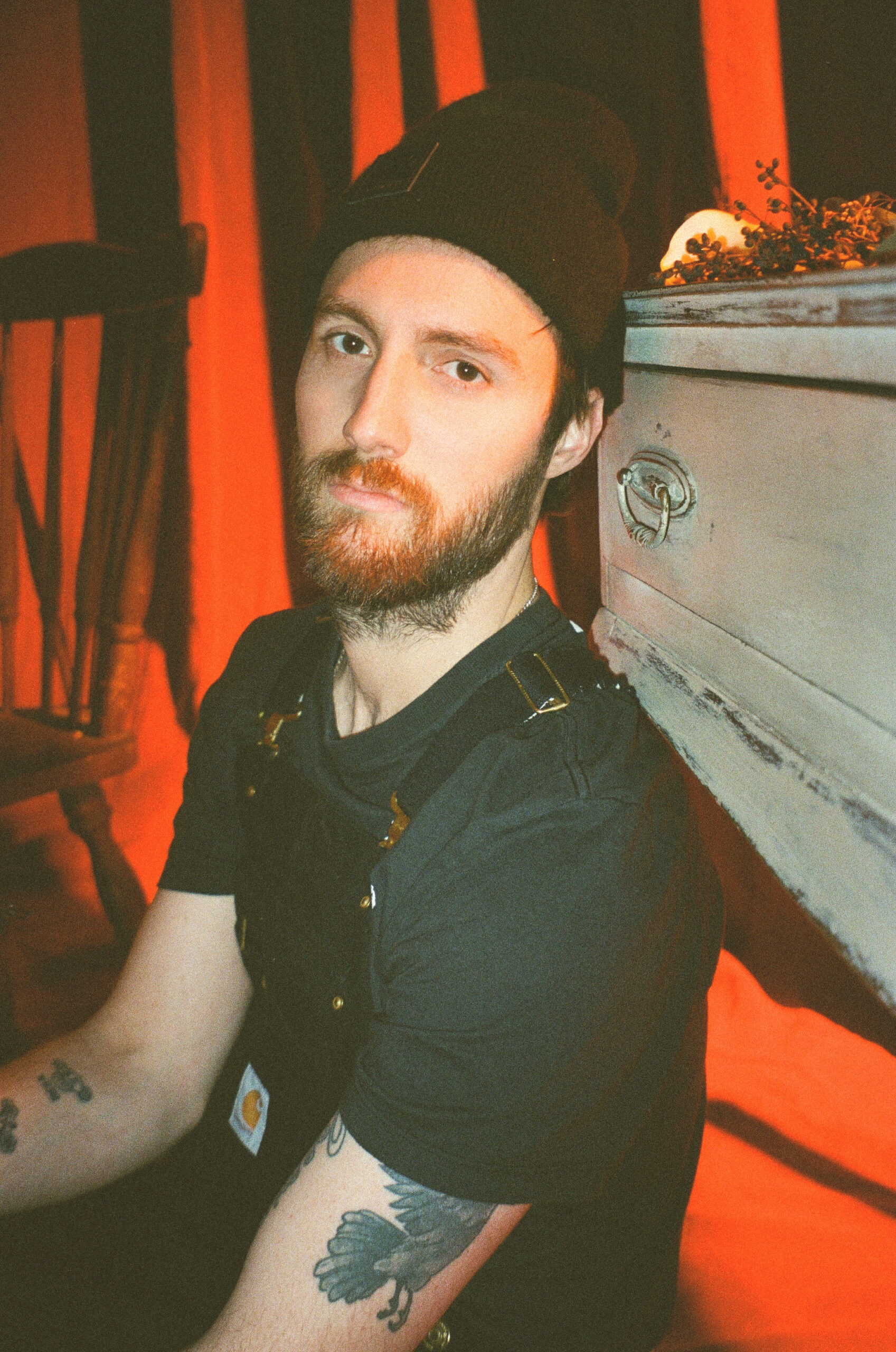 With his sophomore album Shape & Destroy,  Nashville-based artist Ruston Kelly now documents his experience in maintaining sobriety, and finally facing the demons that led him to drug abuse in the first place. But while Kelly recounts that journey with an unvarnished honesty, his grace and conviction as an artist ultimately turn Shape & Destroy into a work of unlikely transcendence.

With its unsparing reflection on what Kelly refers to as “the cycle of frustration and temptation after getting clean,” Shape & Destroy took form during a period of painful transformation. “It wasn’t surprising to me that getting sober was a challenge, but there were moments when it was challenging in a way I’d never experienced before,” Kelly says. “There’s so much repair your brain has to do—spiritually, emotionally, physically—and at one point I really felt like I was losing my mind.”

As a means of self-preservation and catharsis, Kelly eventually turned to the ritual of free writing, a practice that led him to the album’s title. “This phrase just came to me one day: ‘Shape the life you want by destroying what obstructs the soul,’” he recalls. “I realized that was the ticket to healing myself and healing my mind: figuring out what kind of person I want to become, and then getting rid of everything that keeps me from being that person.”

In light of that epiphany, Kelly felt a profound lucidness that soon catalyzed his creative process. “From reading about other artists who’ve gone through recovery, I was sort of expecting a dry spell after getting sober, but that didn’t happen,” he says. “Instead I felt this very heightened awareness that lent itself to so much more artistic output, and the songs just started pouring out.”

“This was the first time I ever recorded completely sober, and I wanted to take the intensity of whatever it took to get me here and leave that splattered all over the wall,” says Kelly. “Rather than telling the band how or what to play, I translated that intention to them to get us all on the same page, and the songs came together exactly the way I needed them to.”

Though Kelly booked nine days at Dreamland, the sessions were so kinetic that the band tore through almost the entire album in the first 48 hours. That unchecked urgency is particularly evident on tracks like “Brave”—a plea for redemption made even more poignant by its stark recording, several times spotlighting a tearful crack in Kelly’s voice. “My father was supposed to play on ‘Brave’ with me, but I decided to do a take by myself to get my bearings,” says Kelly. “It was just me and my dad in a room late at night, him watching me sing this song about trying to live up to the principles he raised me with. I’ll never forgot how powerful that felt.”

Describing Shape & Destroy as a “mental-health record,” Kelly reveals all the false starts and setbacks in getting sober with a specificity that’s unflinching but never heavy-handed. As the album unfolds, his lyrics drift from forthright to poetic to sometimes even storybook-like (an element manifested in its recurring images of wishing wells and stars, flowers and wild storms). On the piano-laced and luminous “Mid-Morning Lament,” for instance, Kelly proves his gift for gracefully entwining wit and confession (sample lyric: “I wanna spike my coffee, but I know where that leads/And it ain’t the safest feeling when the angel on your shoulder falls asleep”). Another elegantly layered track, “Alive” twists classic love-song sentiment into a moment of tender revelation, its dreamy mood magnified by TK’s sighing steel tones and Kelly’s delicate storytelling (“On the horizon/The sun is setting pink/You’re cooking something in the house/Singing John Prine/What a beautiful thing/To be alive”). “To me ‘Alive’ is a testament to how powerful love can be, especially love from someone who embodies a very strong and empowering feminine spirit,” says Kelly. “It’s like they’re able to lend that spirit to you, so you can pick yourself back up and declare who you really want to be.”

Like most of Shape & Destroy, “Alive” was captured in one of the very first takes that Kelly and his band laid down. To make the most of their time at Dreamland, the musicians ended up recording two songs that weren’t initially intended for the album, including “Jubilee”—a warm and rumbling track with a magical backstory. “For a long time I’ve been a huge fan of the Carter Family, especially Mother Maybelle, and a while back John Carter Cash invited me to stay at his grandmother’s if I wanted a writing retreat,” says Kelly, referring to the son of Johnny Cash and June Carter Cash. “I wrote ‘Jubilee’ at Mother Maybelle’s dining room table and didn’t think it would ever make it on the record, but in the studio it turned into this train-song thing that felt really good. It’s just so strange to me that this Johnny Cash spirit came out without me even meaning it to.”

For the closing track to Shape & Destroy, Kelly chose “Hallelujah Anyway”: a minute-and-half-long piece centered on choir-like harmonies from Kelly and his collaborators (including recording engineer Gena Johnson), its lyrics nearly prayer-like in invocation (“And bury me in ﬂowers/When I go I wanna bloom/And come back as the color of a lovely afternoon”). “For me that’s probably the most important song I’ve ever written,” says Kelly. “It’s about having thankfulness for whatever it is that gives us this ability to be positive even in the thick of the blackest moments, and I can’t think of any greater weapon to turn against your lesser self. If I wrote that song and nothing else in my life, I’d be very pleased with what I’ve done as an artist.”

In bringing Shape & Destroy to life, Kelly again tapped into many of his longtime inspirations—Jackson Browne, Dashboard Confessional, the brutal and visceral energy of Kurt Cobain’s live performance—but also looked to such unexpected sources as transcendentalist philosopher Ralph Waldo Emerson. “A huge turning point in my spiritual life was reading his essay ‘The Poet,’ which talks about how artists love wine and narcotics, but the true artist doesn’t ingest anything but water from a wooden bowl,” he says. “As soon as I read that I thought, ‘Damn, you’ve got my number there.’” And through the process of creating Shape & Destroy with total clarity, Kelly emerged with a greater understanding of how to fulfill his purpose as an artist.

“The more I’m doing this thing of touring and gathering a fanbase of people who seem to appreciate these songs and make them their own, the more it fuels the fire to keep doing it—and to do it with even more honesty, now that I’m clear-headed and clear-eyed,” says Kelly. “Making this record definitely taught me that I don’t want to be selfish: I want to channel something larger than myself, and give myself to the process as fully as possible, because these songs also become the story of whoever hears them. Whatever someone might get out of listening to this record and hearing me express myself in this way, it’s completely theirs.”