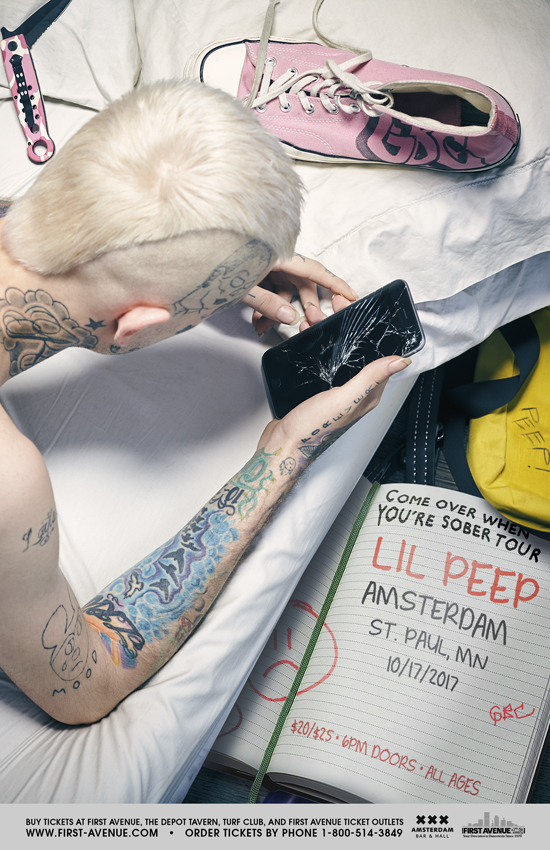 A new generation is rewriting the rules, and Lil Peep may just be at the forefront. He emerged from the hazy SoundCloud underground with 2016’s Hellboy, redrawing the lines of genre by instinct: a rap artist with earnest lyrics indebted to emo, an emo artist unafraid of hip-hop’s directness and contemporary sound, an auteur whose gritty aesthetic belies his broad appeal. Originally from the East Coast, Peep dropped out of high school and moved to Los Angeles at 17, kicking around the city couchsurfing and living under the radar. A music obsessive, he bought a cheap microphone and interface and began recording directly to garage band, synthesizing an array of marginal subcultures into a grungy, cohesive whole that defies easy categorization. A following gravitated to him immediately, with the release of “Star Shopping” in 2015. Despite his growing fanbase, his day-to-day is unchanged. He doesn’t go out, and keeps a tight circle sticking to friends and collaborators like fellow Goth Boi Clique artists Lil Tracy, Horsehead, and Wicca Phase. “It’s deeper than music,” he says. “We’re like a family.” He’s more likely to spend his time watching South Park than hitting the clubs. And of course he listens to music constantly. “It’s a kind of therapy for me,” he says. “I don’t even know who I’m channelling, it could be a combination of a hundred different artists. I’ll make a melody up and lyrics will come to my head that relate to my life, that can relate to other people’s lives too.”