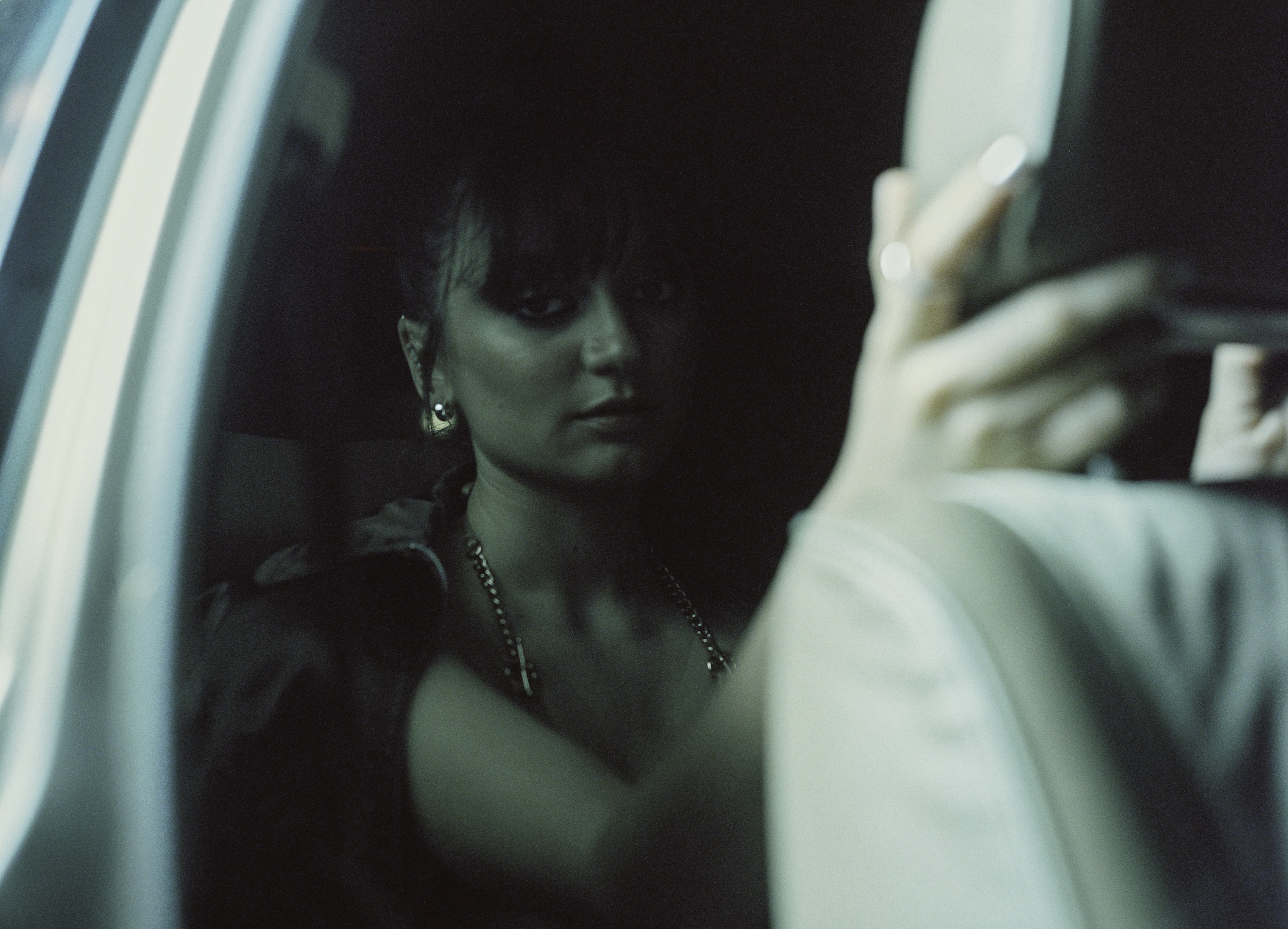 In the mid-2010s, caught up in a non-stop whirlwind of Billboard chart, streaming and Grammy accolades, singer-songwriter Daya was living the dream of every multi talented musical teenager. Released when she was 16, her first two singles “Hide Away” (currently nearing 400M Spotify
streams) and “Sit Still Look Pretty” (currently at 429M+ streams) reached the Top 30 of the Billboard Hot 100. Between the release of those hits and her platinum selling full length debut Sit Still Look Pretty, she sang as a featured artist on The Chainsmokers’ Top 5 nine times platinum smash “Don’t Let Me Down,” which won a Grammy Award in 2017 for Best Dance
Recording. Daya performed at the White House Easter Egg Roll – where she met President and Michelle Obama – and later opened for Carly Rae Jepsen and MARINA before headlining her own tour.

Yete for all of that amazing and ongoing out of the box success, Daya felt some significant and much more important things were missing in her life – including meaningful relationships (romantic and otherwise) and real life human experiences that artists who attain a privileged position are often sheltered from.

The singer’s intoxicating, alternately dreamy/ethereal and infectiously grooving new four track EP builds significantly on the powerful emotional breakthroughs she made on her 2021 EP The Difference, which featured, in her words, “fleeting moments of regret, desire, loneliness and sadness while spending more time with myself than I ever have before at home during quarantine.”

Since the release of The Difference, Daya has gone through a multitude of major changes both in her personal/romantic relationships life and in her day to day life, including buying her first house and making key decisions that precipitated moving on to the next phase of her journey. As a result, she had a lot of emotions and experiences to pull from creatively for her new music. She’s also been writing more consistently, with a greater sense of creative freedom than ever before, exploring new themes and sonic vibes while collaborating with new writers and producers – with less timeline limits than ever before. She promises that the four songs on the EP are just the beginning of more releases to come of songs reflecting this unique and crucial time in her life.

“The songs on the new EP fit well together because they deal with that gray area in between dreams and reality, contrasting the romantic notions of what my relationship was versus the stark reality of what actually happened,” Daya says. “As with the previous project, I am dealing with the loneliness and missing puzzle pieces of life, using music as a vehicle to find my own voice and identity while working through these tough emotional issues.

“Though there were many creative upsides to all of those early successes, having all that happen at a young age meant that I was missing out on other important aspects of becoming a young adult and developing as an artist,” she adds. “I had this real fear that I was out of touch with how
real relationships work and felt like I needed to become more grounded. Taking a step back allowed me to spend more time with family and friends and go through the ups and downs of normal relationships. All of these current tunes come from real life.”

Daya’s determination to put aside preconceived notions of what people expect from her as an artist and explore new musical/emotional terrain led her to largely collaborate with a different crew of songwriter/producers than she worked with on The Difference. The one holdover is Andrew Goldstein (Katy Perry, Demi Lovato, Britney Spears), who co-penned “See You In My Dreams Tonight” with Daya and singer/songwriter Sophie Cates – an intoxicating, funky yet soaring EDM jam about having regrets in a relationship and using the catharsis of dreams to say the perfect words to make things right.

Elsewhere, Daya vibes with The Gifted (Tate McRae, Kygo) on the first lead single “Love You When You’re Gone,” a sensual, atmospheric yet playfully groove intensive and danceable track about the fascinating duality of missing someone when they’re out of your life after a breakup or falling out yet being uncertain whether you miss the actual person or merely the comfort of their presence. Seeing the person again after so much time, Daya in the song comes to terms with the tiny details that remind her why things didn’t work out

The EP’s second lead single is “New Romantics,” one of two tracks co-penned by Daya with Oscar Scheller, a Britpop singer-songwriter known for his fusion of dub, hip-hop and synth pop and his work with Lady Gaga, Pink Pantheress and Ashnikko. The dreamy, soulfully hypnotic song invites us into a fresh otherworldly sonic dimension where Daya creates a dazzling fantasy world about finding that perfect someone who takes our mind off our troubles. “As an anxious person,” she says, “it’s good for me to think of finding someone who grounds me and helps me chill out.” The other co-write with Scheller is the whimsical, synth-pop romp “Her,” a playfully romantic, tongue in cheek tune that all at once captures the whimsical side of the singer’s sexuality and her trademark imaginative, image-rich songwriting style grounded in her childhood days writing poetry and entries in her diary.

“I loved working with all of these great songwriters and producers,” Daya says. “There’s some great rhythmic and atmospheric diversity in the tracks, but the through line is that they’re all openminded and willing to go with me where the song leads. This process allowed us to explore different concepts musically and lyrically and not be so super strict on typical pop song structures, which felt very liberating.”

Before she presented herself and her artistry to the world as Daya – a Sanskrit word translating to “compassion, kindness, to sympathize with and suffering in the suffering of others” – the singer born as Grace Tandon enjoyed a multi-faceted musical childhood. She took up classical piano at three, and later learned to play guitar, ukulele, saxophone and before exploring the rich possibilities of her voice. The Pittsburgh native, who cites her main vocal influences as Amy Winehouse, Dido, Sarah McLachlan and Etta James, attributes her switch from classical to jazz piano at 11 for opening her up to what she could express through songwriting.

Daya’s incredible career trajectory began humbly with local coffee shop gigs before she crossed paths with producer/songwriter Gino Barletta (Selena Gomez, JoJo, Katy Perry), through her longtime voice teacher Christina Chirumbulo. After writing and recording “Hide Away,” Barletta introduced her to Steve Zap of Z Entertainment, a radio promotions veteran who liked the song and formed the indie label Artbeatz to help promote the track and Daya’s talents to the world.

Several years after her initial run of hit singles, Daya emerged in 2019 with the track “Insomnia” (which has 200M+ streams on Spotify) and landed landed film and TV placements for her songs “Forward Motion” (Amazon Studios’ “Late Night”) and “Keeping It in the Dark” (Season 3 of “13 Why”). Finding her voice in the LGBTQ+ community, Daya has performed at major Pride events like the inaugural U.S. World Pride Opening Ceremony in 2019, whose all-star slate also included pop-culture icons Cyndi Lauper, Billy Porter, Chaka Khan, Ciara and Todrick Hall. She also works with GLAAD and The Trevor Project.

“Over the years,” she says, “songwriting has become my primary emotional outlet that has allowed me to express my most personal thoughts, some that I wouldn’t be able to say one on one to anyone. I think it’s an especially magical quality of songwriting that I can say something
either explicitly or abstractly and others will be able to find pieces of themselves within it. In addition to simply writing and singing pop songs, I hope to be creating a bed of emotion that leaves room for listeners to insert their own experiences into. It’s a blessing to be immersed in a creative community that allows me to write songs that are truly authentic to my life and which can also resonate meaningfully with others.”