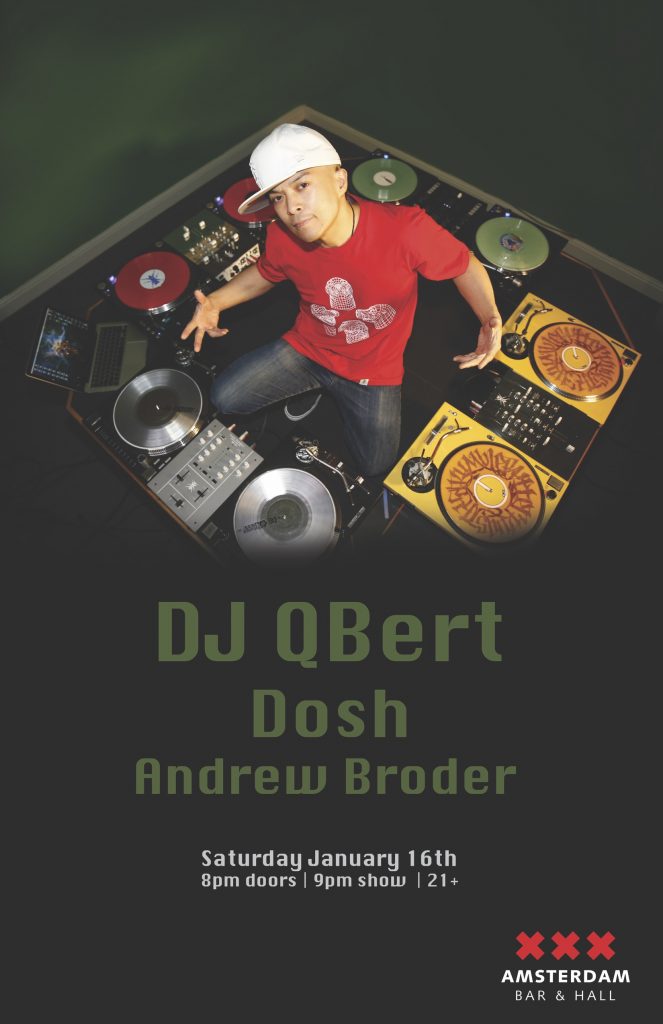 Richard Quitevis was born October 7, 1969, in San Francisco, California. Known by his stage name DJ Qbert or Grandmixer Qbert, is a Filipino-American Turntablist and composer. He grew up in the golden age of the San Francisco Bay Area DJ battle scene of the late 1980’s. Battling and training in the artform is what sets DJ Qbert apart from the rest. He is relentless in unlocking the sounds and systems of scratching. It is Qbert who is credited for championing the turntable as a musical instrument. He is often referred to as the Jimi Hendrix of the turntables, known to make them sing in complex and unimaginable ways. He has invented the most scratching techniques and musical innovations than any DJ in history. QBert is credited for being the world ambassador of the DJ as a musician and turning the turntable into a respected musical instrument.

DJ QBert delivers on this discipline like no other DJ. Along with dear friend Roc Raida of the X-Ecutioners, they have been the only two DJs in history to be Knighted by the Grand Masters of the Hip Hop culture. His peers and the media call him the Greatest DJ in the World, one of the most influential DJs of all time.

A former DMC World Champion and DMC Hall of Fame inductee, DJ QBert has developed some of the most important works that have shaped the Hip-Hop and Electronic music landscape to what it is today. From the early beginnings, with the 1994 release of Demolition Pumpkin Squeeze Musik, hailed by Source Magazine as the best mixtape of all time. To his innovations with his very own skratch records that set the stage for DJs to rebuild all their elements ready to manipulate through custom created vinyl. He created a DJ group to play pieces of his turntable band, giving rise to the Invisibl Skratch Piklz. In 1998, he released his album Wave Twisters, while immediately an animated film to sync with the music was drawn by legendary San Francisco artist Dug-1, drew the movie as he heard it. While in production of Wave Twisters the Movie, another film, Scratch, by director Doug Pray, was being filmed about the history and culture of the Hip Hop DJ, featuring DJ QBert as he is Knighted by GrandMixer DXT. Both films premiered at the 2001 Sundance Film Festival.

In the musical technology circles, DJ QBert is the most sought after stamp of approval. His inventions for Vestax hold as today’s blueprints for turntablism. In 5 years, 5 different designs broke the 1 million sales mark, unheard of designing mixers above the $500 price tag, five times more than the price of battle mixers at the time. Ortofon, backed by almost a century in the phonograph industry chose to spotlight DJ QBert’s achievements and designs by creating the first needle ever made to celebrate a DJ. His last hardware concept was the QFO for Vestax, a lightweight all in one turntable and mixer combination. Limited to only a few thousand made, it set the explosion of portable musicianship for the digital disc jockey.

DJ QBert was also first to breakground for DJs in gaming. In 1998 EA Sports brought him in as the first turntablist to score several of their titles which led to the DJ/Producer invasion inside the gaming industry. QBert has been featured in Street Fighter 4, Frequency by Harmonix, Tony Hawk Underground by Activision, and rumors abound about his next projects with Activision for 2010.

Apple Computers with the comeback of Steve Jobs started series of smart and forward thinking ad campaigns and brought in the likes of Will Ferrell, Yo Yo Ma, Tony Hawk, Kelly Slater, and the one and only DJ QBert. The campaign showed today’s influential contemporary’s who have made the switch from PC to Mac. It solidified Apple’s “cool” effect on it’s brand standing by leaders in their respective markets.

DJ QBert live performances are to be witnessed by jaw dropping fans in total standing about-face solidarity. Entire dance floors stop and just amaze in the turntable wizardry that no other DJ can perform. Throughout his entire career, his style has never veered away to explore the current trends and the latest fads, but stay true to the skills of two turntables and a mixer, these are the official instruments of Hip-Hop.

Born and raised in Minneapolis MN, Andrew Broder has dedicated the better part of his thirty-plus years to carving out his own singular path in music. Andrew has spent time as a cutting and scratching hip-hop battle DJ, a snotty punk rocker, a challenging and thoughtful improviser, soundtrack composer, working sideman, producer, remixer, beat-maker, poet, brutal noise-monger and above all a fearless, restless and provocative songwriter.
His work is a study in surprise and defying expectation. With his records as Fog, he re-defined the turntable as a compositional tool, and his contributions since to avant hip-hop, rock, jazz and metal have been equally engaging, and envelope-pushing. His lyrics are cutting and evocative, his melodies poignant and tart, and his curiosity leads him to unexpected juxtapositions in sound and image. Currently, he fronts the rock band The Cloak Ox, and has his hand in numerous other projects and collaborations. In whatever genre or medium he works, he strives to take the listener somewhere they have never been, or make them more keenly aware of somewhere they already are.

With the flash and efficiency of digital song-making technologies, it can be easy to lose sight of the merits of that which is analog. Martin Dosh, then, has become something of an accidental preservationist, keeping instruments like Rhodes keyboards and an ancient Korg EX 800 sequencer alive by using them in his innovative solo works and collaborations with the likes of Andrew Bird and Bonnie “Prince” Billy.

Over the years, he’s graciously given over rich compositions like “First Impossible” (which became Andrew Bird’s “Not a Robot but a Ghost”) to collaboration, but with Milk Money, his latest solo release, Dosh decided to let his arrangements stand on their own. Blending elements of hip hop, jazz drumming, vocal samples and electronic production, he builds a variety of warm soundscapes. His mixes of piano, percussion, vocals and more are broad, room-filling compositions, created by running the elements of each track through guitar amplifiers simultaneously, creating a “re-amp” effect that allows each song to breathe. The result is a collection of open pieces, like the wonder-tinged “Kisses,” that invite the listener to step inside.

Looping pedals are integral to Dosh’s music, and he uses them here to great effect. With a stage set-up that looks like a fort erected by a kid with only musical instruments for building materials — boxed in on all sides by keyboards, drums and complicated boards of knobs begging to be jiggled — Dosh uses loops to construct his soundscapes solo. The resulting complexity and breadth of his songs is most evident on the record’s closing track, a nearly 25-minute number Dosh composed for a duo performance with Wilco’s Glenn Kotche at the request of the Walker Arts Center in Dosh’s hometown of Minneapolis. Beginning with a single pinging note on the Rhodes, it winds through many cycles, eventually blossoming into an ebullient flurry of sound.

Milk Money is the recording of a vital mind alive with the possibility of what it can create. It brims with a warmth that can’t be digitized. It’s the satisfying, immediate thwack of drumstick again drumhead, the visceral pleasure of a grown-up boy at play inside a musical fort.