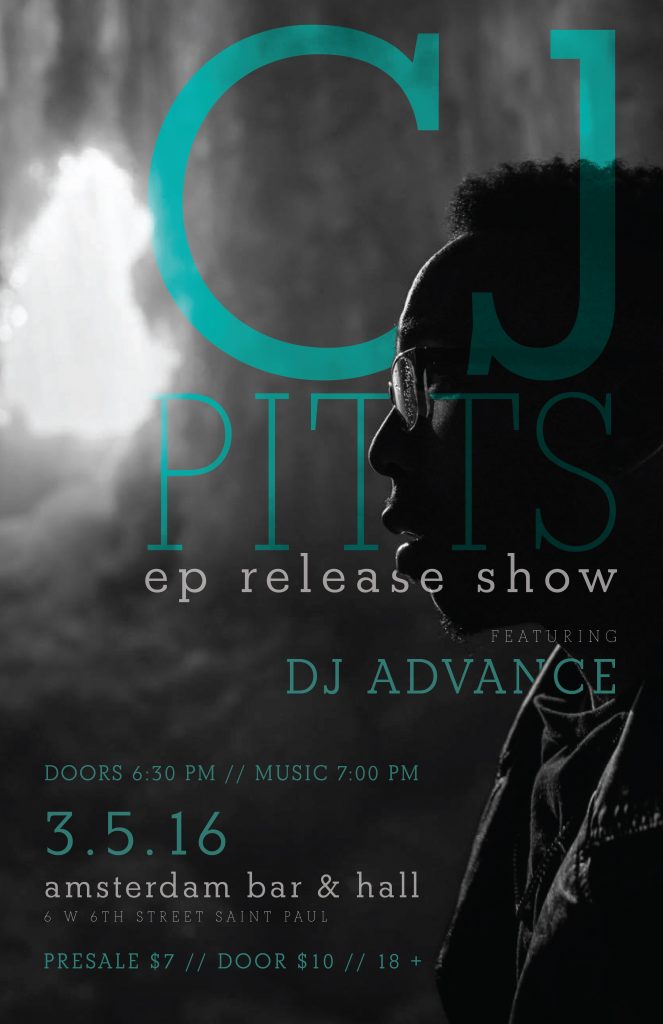 • Originating from Bear, Delaware but planting seed in St. Paul, Minnesota, CJ Pitts has made his mark on the twin cities music scene. Finding his passion in 2010, CJ Pitts has engulfed himself into the roots of music and his inspirational pool is very wide. Young singer has a knack for not just singing but songwriting and minor production as well. With his debut EP “Lost Identity” closing approaching in March 2016, CJ has been preparing himself to climb the ladder of the music industry.

The young artist has played all over the Twin Cities from First Avenue, Bunkers, Amsterdam Bar & Hall, Honey Bar, and many more. Being surrounded by a variety of music and musicians, CJ is constantly growing and expanding his sound and lyrical content. Constant growth is what he strives for and is determined to be the best musician he can be. Now at the point of completion for his first EP, Pitts has already begun creating the vision for his next Album.

• Determination being the root to his ever-progressing success, DJ and producer DJ Advance has become a well-known name in Minnesota’s hip-hop nightclub scene. Although versatile in many genres of music, hip-hop in his love. He began his career in 2005, DJing and hosting his own events. In 2010, he started his own company 3Way Entertainment LLC, in which he hosted many parties and events, his most recent being New Year’s Eve and “All Black Everything” birthday celebration.

Gaining hundreds of followers, DJ Advance has played in numerous Minneapolis nightclubs such as, Aqua, Spin, Sound Bar, and Envy, which hosts over 400 party-goers weekly. He was also selected as headliner DJ for concert after parties for various renowned R&B and hip hop artist such as, TI, Future, J. Cole, Kelly Rowland and Lil Wayne. Earning major spots on Minneapolis stages, he was opening DJ for the 2013 French Montana “Excuse My French” tour, MTV Jamz “The Life is so Exciting” tour, Meek Mill “Dreams and Nightmares” tour and 2 Chainz “BOATS” tour.