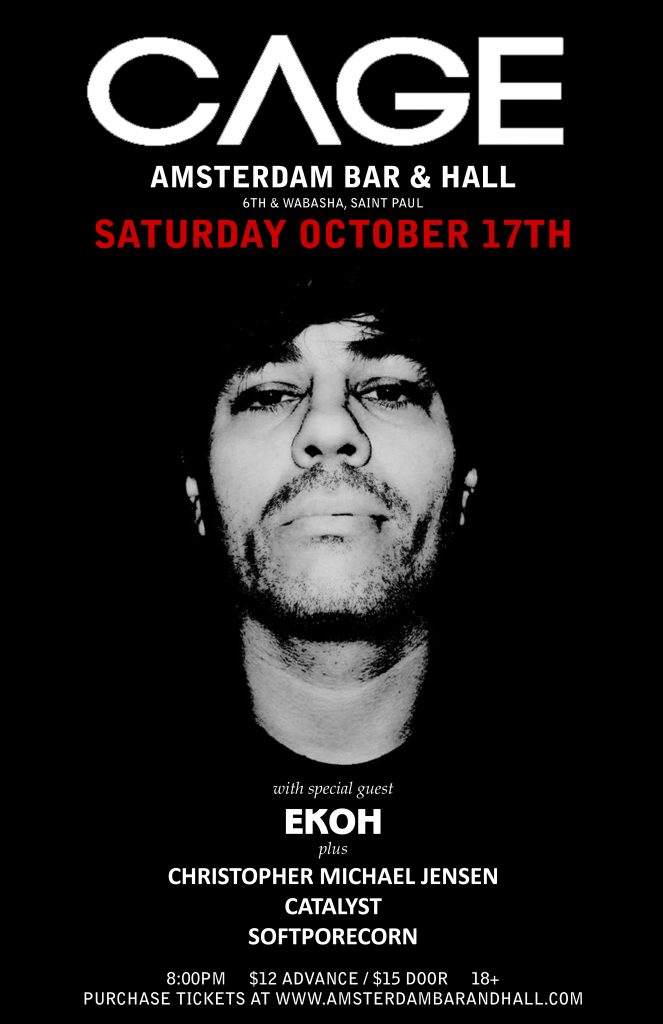 The tortured and visceral lyrics of underground rapper Cage (Chris Palko) come from a life of pain, paranoia, hard drugs, and hard living. His father was busted for selling and using heroin, going as far as to have the young Cage tighten the tourniquet around his arm. A standoff with the state police after threatening his family with a shotgun. While in high school, Cage went home to a physically abusive stepfather. Drugs became a serious problem for the teen, leading to expulsion from school, getting kicked out of the house, and various arrests for various crimes. Facing serious jail time, Cage’s mother convinced the judge to send her son to a mental institution instead of jail. Sentenced to 18 months in the Stony Lodge Psychiatric Hospital, his depression deepened and suicide attempts led to solitary confinement. It was there that Cage had nothing to do but write his thoughts on paper.

Released from “the Lodge” and confident with his writing skills, Cage began practicing his rap and eventually cut a demo. Appearances on DJ Stretch Armstrong and Bobbito Garcia’s legendary N.Y.C. radio show got his name out and lead to friendships with the KMD crew, the late Subroc, Pharoahe Monch, and producer El-P Cage recorded three successful underground 12″s for the Bobbito’s Fondel Em label , including the revered “Agent Orange.” He then formed the Smut Peddlers with Mr. Eon and producer Mighty Mi. The group was signed to the hot underground label Rawkus in 2001 and released the album Porn Again that same year.

Going solo again, Cage signed with the Eastern Conference label and released his full-length solo debut. The album was well received by critics and underground hip-hop fans. A year later he formed the superstar group the Weathermen with Camu Tao, El-P, Aesop Rock, Yak Ballz, Tame One, Breeze, and Vast Aire. Cage decided he needed to be more open in his writing and stop playing a character. While his new writing style was no less blunt or shocking, it was more genuine, something longtime friend and associate El-P noticed and began to champion. Cage and El-P began work on his next album, enlisting the help of RJD2, Camu Tao, DJ Shadow, Jello Biafra, and Yo La Tengo member James McNew. The album, Hell’s Winter, was released by Definitive Jux in 2005. The occasionally bracing Depart from Me, an album with an even nastier sonic disposition, followed nearly four years later.

Ekoh is unlike anything you’ve heard before. Branded with the label of HEART HOP by loyal fans who saw something different in his sound. This emcee has been making his name in the hip hop scene known. Hard hitting lyrics, a genuine emotional transparency, intense delivery, dominating vocal presence, and intricate production blend to make a completely unique sound for hip hop.
An entertaining, high energy live show has placed Ekoh on stages with some of the biggest artists in the genre including Tech N9ne, Wu Tang Clan, Murs, Kottonmouth Kings, Dizzy Wright, Slaughterhouse, Immortal Technique, Grieves, Flobots, Sage Francis, as well as earning him spots on the Vans Warped Tour and Life Is Beautiful Festival.
Ekoh is a song writer who can blur the lines between genres to create a truly amazing experience to resonate with any music listener. Ekoh is currently working on the follow up to his 2013 EP “Zzyzx Road”.

Christopher Michael Jensen has no alias. He lacks a fake persona. His music tackles everyday struggles, relationships, politics, and his own personal demons. His songs are at times self-assured and confrontational, and at other times vulnerable and soul searching. Through it all, however, he truly embodies the DIY philosophy and mantra of “living hip hop 24/7.” A student of the culture for more than half his life, Jensen began rapping in the year 2000 when he was just 13-years-old. Born and raised in Minneapolis, Minnesota, Chris has been an extremely active member of the highly renowned Twin Cities hip hop scene. He has shared the stage with national acts like Joell Ortiz of Slaughterhouse, 2Mex, Kosha Dillz, Sadistik, and Soulcrate Music, as well as many local veterans and legends, including Toki Wright, DJ Abilities, Kristoff Krane, Carnage The Executioner, Kill The Vultures, No Bird Sing, Guante, Ecid, Big Quarters, and Big Jess of Unknown Prophets, just to name a few. Music Emissions remarked that Chris is “‘true-school’ hip-hop in the vein of old school acts such as A Tribe Called Quest, De La Soul, The Pharcyde and the likes” and that he has “got the flow…the thought-provoking—often introspective—lyrics, and obvious passion.”

Immersing himself in the art form, the Minneapolis native spent years honing his skills as an emcee, performing at talent shows and school functions and making homemade CD’s for people in his younger years. In 2009, shortly before graduating from the University of Minnesota with an English degree, Christopher Michael Jensen released a lo-fi project to the Internet as a free download called Lyrical Combustion: The Mixtape. In 2010, he released his official debut album, entitled There’s Meaning Underground, in stores and online. 2011 saw the release of The Chris Tape, Volume One, before being followed up with The Chris Tape, Volume Two in 2012. Both projects were well-received, garnering praise from critics and fans alike, and rotation from stations like The Current, Radio K, and KFAI. Shortly after, Jensen forged together with fellow emcees Panash and .dB to form a group known as EQs-Men. Their debut release – The EQs-Men EP – came out in 2013. In 2014, Chris finally released his latest solo album CM Cool J. A day after releasing it, he got the surreal opportunity to rap on Sway Calloway’s “Sway In The Morning” show on Serius XM’s Shade 45 network to a worldwide audience.

CM Cool J is Christopher Michael Jensen’s most fully realized and focused work to date. Each of the 13 tracks on the album contain production from a different Minnesota beatsmith, with features from recent Rhymesayers signee Dem Atlas, as well as Liz Harper, Ashley Seeler, North Star Wisdom, and Lydia Liza of Bomba de Luz. In a review, Reviler.org commented that “what’s great about Chris is that with each release, he raps with a bit more confidence, and vocally he raps very conversationally, with almost a cynic twist, which definitely sets him apart,” adding that CM Cool J is “a lot more than meets the eye on the surface.” RapReviews.com said at times on the album Jensen “sounds like the Twin Cities meets The Coup,” and during other moments “is a little bit Marshall Mathers.”

Christopher Michael Jensen has also been heavily involved with several charitable endeavors, playing a benefit for the Make-A-Wish Foundation in 2011, and the following year performing in support of international organization Oxfam and their fight against the West African food crisis. 2012 also saw the beginning of “Rap For Life” – a benefit series spearheaded by Jensen and his friend Ashley Seeler that has raised thousands of dollars for many life-or-death causes including suicide prevention, chemical dependency awareness, domestic abuse awareness, and mental health. Other causes Chris has been involved with include assisting the homeless, helping those with AIDS, benefitting autistic children, charter schooling, the fight to end sex trafficking, and LGBTQ pride.

An up and coming hip hop crew, hailing from Minneapolis, MN.