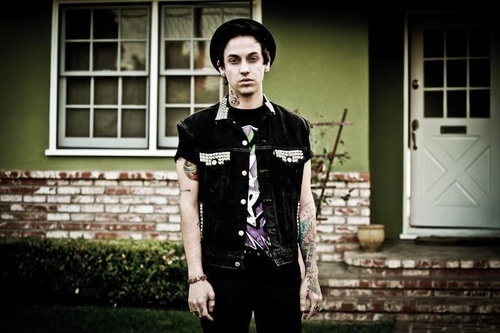 Since 2012, independent recording artist Blackbear (a.k.a. Mat Musto) has built a reputation in the music industry as a prolific songwriter, gifted beatsmith, fierce live-performer, and social media force-to- be-reckoned-with.

The Valentine’s Day 2015 release of his first LP Deadroses took his chart-topping to another level, debuting on the “Top 200 R&B/Hip-Hop, Independent, HeatSeekers & Uncharted (listed o both charts at #4) charts on Billboard.

In both anticipation and wake of its launch, a rise began that culminated in attention from Billboard (#4 on Uncharted in Social/Streaming, and #48 on Heatseekers in Launch Pad for May 2014) and features in two magazines- Issue 25 of Highlight and Issue 12 of Two Fleet.

In 2014, Backbear co-headlined his first major tour called the “All I Wanna Do” tour alongside T. Mills and Mod Sun. The tour hit 47 major cities across the country and started a new chapter in the Blackbear saga. In congruence with his prolific reputation, the past two years has seen over ten separate track releases from Blackbear apart from his newest LP release.

Many of these ranked on Hype Machine and found audiences across the national and international blogosphere. As his career heads to new heights, Blackbear maintains his portfolio by working with some of the hottest up anc coming artists such as G-Eazy, whose album ‘These Things Happen’ reached #1 on Billboard for Rap Albums and #3 on the Billboard 200. On the ‘These Things Happen’, Blackbear produced the intro/title record and was also featured on track fourteen, “Remember You”. His upcoming work consists of collabs with groundbreaking artists such as Kid Ink, DJ Reflex, Mod Sun, Metro Station, JoJo, and Trevor Jackson. In addition to continuing his repertoire of features, Blackbear hopes to make more touring appearances this year in an effort to widen the loyal grassroots following he has collected thus far.