Alien Book Club is a seven-piece band from the Twin Cities that has been playing together since the summer of 2019. The band consists of Anita Velveeta (she/her, guitar and lead vocals), Andrea Bauer (she/her, bass and vocals), Thomas Coyle (he/him, drums), Ben O’Malley (he/him, percussion), Amber DeBellis (she/her, lead guitar), Allison Payonk (she/her, saxophone), and Dante Leyva (he/him, saxophone). During their time as a band they have played many shows locally and out of town throughout the midwest. In January 2020 the band toured for two weeks through the Midwest and Southern U.S., venturing on their longest journey as a band yet. In 2021, members of Alien Book Club started their own label, Kitchen Knife Blood Pact, where they will continue to release their own music, solo projects of each member, and are supporting, producing, and releasing music of other local bands. Taking inspiration from many different genres, the music of Alien Book Club is eclectic and high energy. They will be releasing their first full length album later this year, culminating the many genre-defying sounds of ABC.

RiGBY is a DIY punk band out of St.Paul, Mn. The 4 piece group got their start in April of 2019 and consists of Fay Dunkel(guitar), Kean Wilwerding (drums), Maude Lorr (Bass and vocals), and Hana Mahli (Bass and vocals). The band is best defined by their loud, stage shaking performance that combines riot grrl style screams and vocal harmonies. RiGBY blurs specific genre lines while leaving everything out on stage. They recorded their debut album “We’re Dying” alongside Minnesota based artist and producer, Benny Cole. We’re Dying can be streamed anywhere you listen to music. 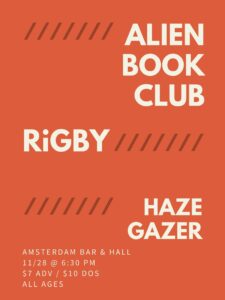