Every four years, the scene resets. With every college graduation and hesitant grasp of adulthood, there are bands being formed in the fire of heated Twitter discourse and surprisingly, actual recorded music. Niiice. is one of those groups: formed in Minnesota, reinforced on the road, sustained online. In the aftermath of 2019’s breakout EP Never Better, the trio (guitarist/vocalist Roddie Gadeberg, bassist Abe Anderson, drummer Sage Livergood, and guitarist Zack Cummings) fostered a fierce commitment to their bits. The gang could be found poking fun at Ben Shapiro, lording over virtual gigs hosted on doomed Minecraft servers, and serving up a sudsy, self-conscious blend of post-hardcore and pop punk. Somehow, they had time to write and record a sophomore LP. Internet Friends uploads niiice.’s neuroses to the cloud before blowing the whole thing up. For once, the niiice. defenders have not just logged on. They’re wired in. 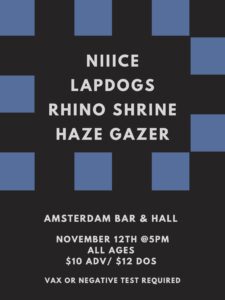