Skip to content
Killed by Kiwis is a Minneapolis-based psychedelic hard rock band inspired by the sounds of Metric, Muse, Pink Floyd, and Heart. With a hard-hitting rhythm section and soaring vocals from singer Annie Thoma, they forge a voice that is uniquely their own. Their debut album “Unravel” is centered around themes of political corruption, environmental depletion, and realizing identity in uncertain times. Their newer songs move beyond the troubles of Earth and utilize the wide range of sounds created by synth player Eli Haugland to take their listeners into the depths of an interstellar dystopia. The team: Annie Thoma – Vocals, Eli Haugland – Synths, Frankie Carlson – Guitar, Griffin Baumann – Guitar, Quinn Siebers – Drums, Simon Midtbo – Bass.

!Okay is an indie rock band based out of Minneapolis. They come from a variety of performing backgrounds including punk, rock, ska, jazz, and classical. Their first single, Special Kind of Brew, was released this Fall and they are working on finishing their first EP for an early 2022 release.

Ellis Korblick Jay is a Minneapolis-based artist who makes music under the name First Electric. Drawing inspiration from anything and everything, First Electric likes to write music for guitar, voice, and miscellaneous electronic instruments and tends to stay away from genre labels. On October 1st, 2021, First Electric released his debut EP ‘While I Make the Same Mistakes’ and released the Remix EP later that month. 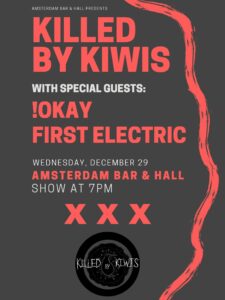