Baumgardner is a three piece grunge/punk rock band from Minneapolis, Minnesota. Inspired by invigorating, heavy and noisy riffs met with the simplicity of pop, Ted Tiedemann and Nick Corcoran formed the project 3 years ago. They played their first show in 2019 in a basement in Como as a duo. After a few lineup changes, Robert Northup joined the band on bass, his first show with them was at 7th Street Entry this past summer. The band has finished recording material from their studio sessions with Elijah Deaton-Berg and plan on having future releases.

ALLERGEN is an indie rock band from Minneapolis, Minnesota fronted by Shannon Maroney with Mia Pariseau on bass and Anna Shenehon on drums. They released their first full-band (which was Eve Speers by on guitar, James Flanders on bass, and Shenehon on drums) EP “Honesty Hour” in May of 2020, which has been featured on radio stations such as Radio K and KFAI. Allergen mixes crunchy riffs, emotional lyrics, and powerful vocals, and, as described by local music blog Ear Coffee, “feels like a private conversation being broadcast to the world”. 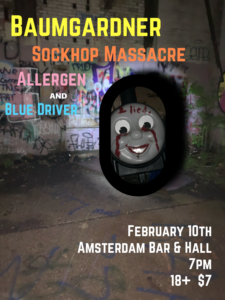