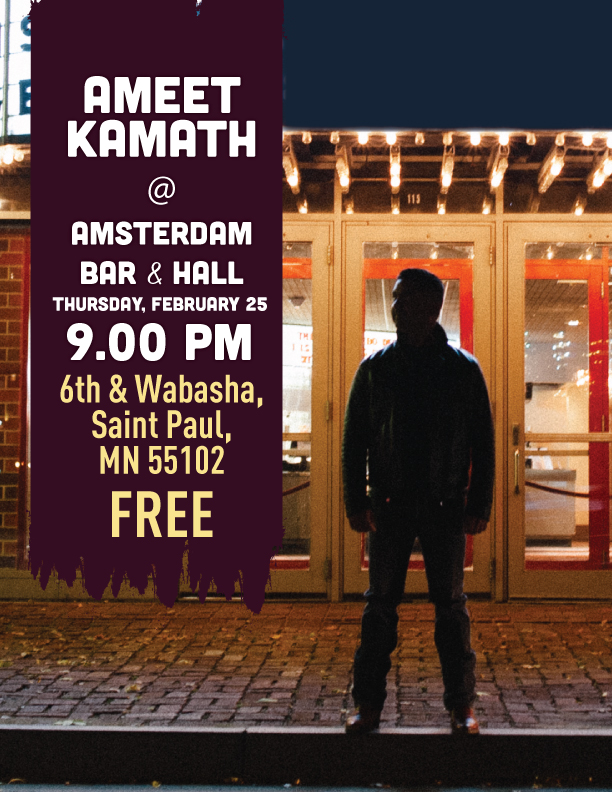 Back in his Jesuit school choirboy days in Mumbai, Minneapolis-based singer-songwriter Ameet Kamath made a mind-altering musical discovery that would change his life forever. He resisted the call of Bollywood to indulge in the guiltier pleasures of western pop. Listening to bootleg cassette tapes of American Top 40s and the British Top of the Pops, led him to follow The Beatles, ABBA and Queen amongst others.

“My parents thought I’d grow out of it. But I didn’t. That was the scene I fell in love with—the singers and bands who showed off their stuff to audiences who understood the fun and joy of the music. I still haven’t grown out of it. Instead I’ve grown into it.”

Kamath’s passion for western sounds transported him out of India into the United States, where he worked as a techie in New York City, then San Francisco and now the heartland, a place that has inspired him to new heights.

“After a couple of years in Minneapolis, I came to the conclusion that I don’t need to live in the big cities to realize my creative dreams. This city offers me an abundance of opportunities to pursue not only my singer-songwriter aspirations but a wide range of musical opportunities” said Kamath, who is a Tenor 1 at the Mount Olivet Church Choir.

Back in 2010, he unveiled his self-produced debut Greasy Rails, conceived in New York City and recorded in San Francisco, to enthusiastic acclaim. Soundbox, India’s premier music industry publication, hailed it for “breaking new grounds in bridging the popular divide of the music of the East and the West.”

The album sought to give voice to Kamath’s immigrant experience in the least stereotypical fashion possible. In other words, no “bloody tabla or sitar” to be heard anywhere in the mix. “I didn’t want to be another Indian crossover singer,” he says. “If my music crosses over anythings, it’s from pop to folk-rock.”

In his latest effort, Into The Night, to be released in March, 2016, Kamath, now a naturalized U.S. citizen, invites listeners into his nocturnal world full of love, loneliness, heartbreak, dance and dreams. He weaves pop and jazz together in an evocative manner that transcends genres and shatters convention while still straddling the East-West cultural divide.