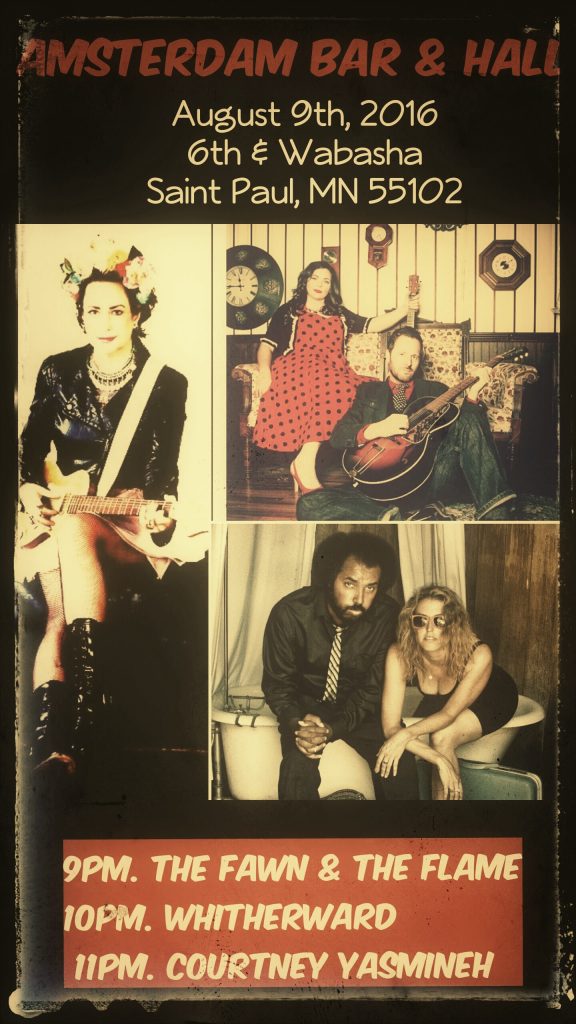 The Fawn & the Flame is an indie duo from Minneapolis that consists of two singer/songwriters, Jonathan Benson & Carey Keavy. Jonathan & Carey come together to create a smooth blend of blues, folk and pop rock in an acoustic duo which channels bands like The Civil Wars, and The Head and the Heart. Both bring their own unique style to the table, and meld together in an almost effortless partnership featuring gorgeous harmonies and exploring the angst of all things love, life and broken hearts.www.thefawnandtheflame.com

Whitherward is the partnership between singer-songwriters Ashley E. Norton and Edward A. Williams. 4 EP’s later and a new album on the way, the duo has built a catalog of varied, intricate songs that explore the effects of the human condition. Beginning their career together in the writer’s rounds of Nashville, Ash and Ed grew into a full-time touring duo. They threw their belongings in storage during the summer of 2015 and have been on the road ever since; playing music they love, for people who love music.

Songwriter, guitarist, and vocalist Courtney Yasmineh hails from Chicago, Northern Minnesota, New England, New York City, and Minneapolis. The songs she writes sound like all that plus her nine self booked tours to Europe with her back up band. Geography and convention cannot hold her down and 2017 promises to be better than ever as she sets out on tour with the release of her first published novel and a seventh album with the working title “Ghost Party Reunion”. www.courtneyyasmineh.com